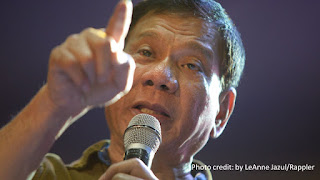 Last week, over 7,000 pastors in Manila under the G-12 movement pledged their support to the presidential candidacy of Mayor Rodrigo Duterte. At the onset, let me make myself clear; this post is not an endorsement on Duterte's candidacy to the presidency. As already pointed out in my previous post, The Political Divide, I try to maintain my political neutrality to avoid the proliferation of political polarity in our society. Thus, this is  but an observation to his sincerity and why people are rallying behind the man.

Sometime, ago, as I was watching a video of Duterte's full speech during a forum in Los Banos Laguna, I cannot but admire the Mayor's genuine sincerity to save his country's future by ending corruption, criminality and drugs. After watching the video, I have come to understand why Duterte has both die-hard supporters and die-hard haters. Toward Duterte, it maybe difficult to be neutral! His acquaintances are pretty much divided in two camps; those who love, admire and support him and those who hate, dislike and campaign against him. This is the Duterte syndrome!

The people who clamor for genuine change in the Philippine political scene believe that Duterte is the only candidate that can truly bring change and get the job done. We Filipinos acknowledge that one of our worst problems is the lack of discipline. See how we dispose our garbage. See how we drive in the streets. Just look at the laws and regulation not being implemented. While others may disagree, many Filipinos believe that it takes a strong leader, with an iron hand to make the Filipinos bow and follow rules and regulations. Duterte seem to fit this assumption. His track records, experiences, and governance seen in Davao City, are undeniable. If he was able to do make Davao one of the safest cities in the world, he could also do the same thing in the entire Philippines, his supporters claim. The skeptics, however, see otherwise.

Those who are not in Duterte's camp worry about how will the mayor, if elected president, actually fulfill his objectives. How could Duterte ends criminality and corruption within 3-6 six months? This is "too ambitious", echoes at the anti-Duterte camp. They are concern about him becoming another dictator, violating human rights and killing criminals without due process. Filipinos who went through the Marcos regime believe that the country does not need another dictator. The fear of losing freedom and extra judicial killing, the mayor's foul-mouthed talks and womanizing were among the cited issues raised by the anti-Duterte camp. Not only that but, his critics are disturb with Duterte's contradictions, flip-flopping and his merciless attitude toward criminals. In contrast, his supporters are not bothered with the mayor's vulgarity and persona--these are just fractions in comparison with his accomplishment, ability, and platform for a better Philippines.

There is yet another reason why some would hate Duterte to the core. If indeed, he will deliver his promise of ending corruption and getting rid of criminals in high places, it is not surprising that those who want to continue their corrupt practices and criminal activities would make it sure Duterte will not win the presidential election. While others' concern seem to be legitimate, others' hatred are fueled by personal interest and selfish ambition.

30 years, after the EDSA People Power that ended the reign of President Marcos, the Philippines went deeper into a state of graft and corruption; and the national debt escalated beyond our capacity to payback. In the last 30 years, we have had two women presidents, a military general, an actor, and a bachelor. Yet, it is beyond reasonable doubt that the five Presidents after Marcos have not made any slight improvement in the endemic problem of corruption. The tide of corruption covers  the Philippine government but politicians are either ignoring it or simply riding with the tide for personal gain. Is there hope for the Philippines from the bondage corrupt practices? Don't worry, "CHANGE IS COMING," the pro-Duterte shouted! 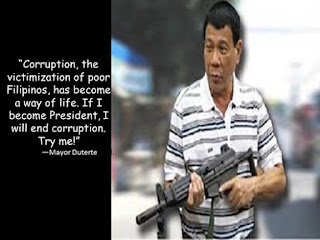 Duterte's die-hard supporters are tired of empty promises being made by politicians to fight graft and corruption that permeates every government office and agency. People are hungry for change! Thus, rallying behind the only man they believe who can save the nation parallels their love for the country and for the next generation.

Here is the promise made by the tough-talking Mayor. "Corruption, the victimization of the poor Filipinos has become a way of life. If I become President, I will end corruption. Try me!” He also said, “If elected president, give me about three to six months, I will get rid of corruption, drugs and criminality." He had spoken this many times during his campaign. Duterte's promise for change is backed by over 20 years of governance. That is a sure certificate and credential; trying to discredit his accomplishments is non-sense. Yet, how many Filipinos will take him seriously and try him? We will find out in May.

Meanwhile, I fully agree with my friend  Candy's blog post that we need to "seek divine intervention" who should lead the country in the next 6 years after the May election. But I also believe that if we truly care for our country, we should be willing to sacrifice our own preference, favoring someone, and vote for a better candidate as God leads. Join me in praying that in May, God will put someone in the highest office of the land by His divine intervention. Nonetheless, we must seek divine wisdom and vote wisely, for our own choosing will either break or make the future of our nation!
Posted by The Igorot Preacher at 11:20 PM