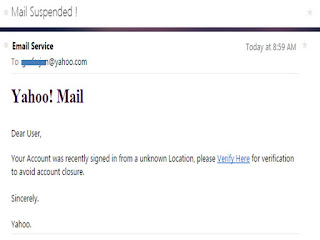 Protect your email account and don't fall into the scammers and hackers' trap! They are genius, witty, and clever!

The scammers are not leaving me alone! This morning I received another email from Yahoo with a subject, Mail Suspended! The email says, "Your Account was recently signed in from a unknown Location, please Verify Here for verification to avoid account closure."

At first, I thought it might be true. So I almost click on the link. Usually, if there is an attempt to login to my email, I will receive notice from Yahoo with exact location, time, and IP. The email would often tell me to ignore or change my password if it was me. The email I got this morning was different. What the hackers didn't know was, I have a security verification set up, so even if they figured out my password, they will still have to enter a verification code comes by Yahoo through SMS or email. Therefore, it is impossible that someone hacked my email this morning without me receiving the code from Yahoo through my phone.

To make it sure, my email was not suspended I tested it and still works!

Here is the email below!


Yahoo! Mail
Dear User,
Your Account was recently signed in from a unknown Location, please Verify Here for verification to avoid account closure.

Sincerely.
Yahoo.
Posted by The Igorot Preacher at 3:18 PM

Email ThisBlogThis!Share to TwitterShare to FacebookShare to Pinterest
Labels: Yahoo 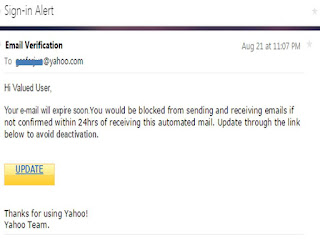 I captured this email from my yahoo account today, August 22, 2015. This is not true. If you will get one, ignore or delete it! It is from a scammer trying to hi-jack your email address to spam all your contacts and then use the account to spam hundreds/thousands of others. Yahoo and all email companies, all banks and all companies in the entire world will NEVER ask for your password, pin or date of birth.

Here is the email!


Hi Valued User,
Your e-mail will expire soon.You would be blocked from sending and receiving emails if not confirmed within 24hrs of receiving this automated mail. Update through the link below to avoid deactivation.


Thanks for using Yahoo!Yahoo Team.

After 36 hours my email is still working. It has not been blocked!
Posted by The Igorot Preacher at 4:15 PM

Email ThisBlogThis!Share to TwitterShare to FacebookShare to Pinterest
Labels: Yahoo

Outrageous OFWs Versus Bureau of Customs

The current viral news among Filipino communities throughout the world in the last few days is the of Bureau of Customs' (BoC) new regulation to open 'Balikbayan' boxes and tax if goods are beyond the $500 value limit. Overseas Filipino Workers (OFW) are furious at this and expressed their outrageous and fiery  comments against BoC in social media.

What is a Balikbayan Box? "The balikbayan box is a box filled with various items sent by an OFW (overseas Filipino worker) to his/her family or friends back in the Philippines. It is often shipped by sea for cheaper rates; though it is also common practice for OFWs returning home to also bring a box or two by air" Read More at rachfeed.com/peba-invites-ofws-use-protest-banner-customs-new-regulations/


Furthermore, because an OFW is restricted to sending one balikbayan box every 6 months, how could they even afford to smuggle expensive items to the Philippines? If it was true that smugglers are using balikbayan boxes to smuggle illegal and high value items, it is the duty of the BoC to check on those by using machine scanner and other measures. According to an article posted on FB today, the Philippine Government loses 600 Million to balikbayan boxes but billions to smugglers. This is such a small amount in comparison. Why don't the go after big time smuggler?


Corruption is rampant in the Philippines and the Bureau of custom is considered the most corrupt agency. No wonder, Bureau of Customs is now dubbed as Bureau of Corruption!

What to do with this regulation? Trash it! Why even think of opening when BoC can simply use machine scanner? Not to mention that items are labeled before they are shipped! No to opening balikbayan boxes! BoC should focus on cleaning up the agency first and then run after big time smuggler. When all is done, let's talk about regulation on the balikbayan box! 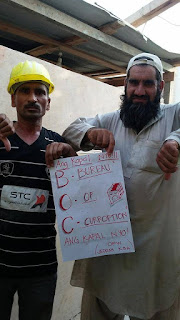 Posted by The Igorot Preacher at 3:46 PM

Email ThisBlogThis!Share to TwitterShare to FacebookShare to Pinterest
Labels: OFW

What I Can Do For My Church 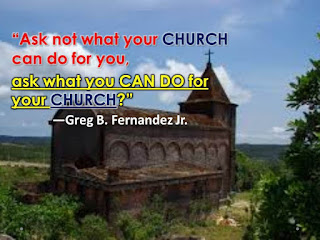 Here are outlines of the sermons I preached at PPC.  These are my own topical outlines on the given topic based on my own context. You have the freedom to edit, revise, make it your own and use for your own church!

Why I Ought to Love the Church 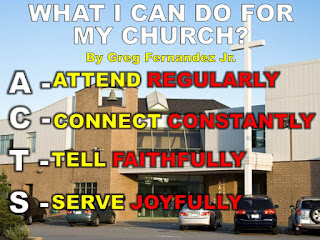 Email ThisBlogThis!Share to TwitterShare to FacebookShare to Pinterest
Labels: Sermon

Why I Ought to Love My Church?

Here is a sermon outline I preached few months ago at my church in Phnom Penh, Cambodia.
Click the link below to access the power point presentation!


Why I Ought to Love my Church
Posted by The Igorot Preacher at 9:01 PM