The First Kankana-ey Wesleyan Pastor Dies in His Sleep

Greg B. Fernandez Jr. on Heaven Sounding Sweeter All The Time

Rev. Rufino Wesley Duay Kimao (RWDK), the first Wesleyan Pastor among the Kankana-ey tribe in Benguet passed away on September 30, 2013, and was laid to rest on October 3 at Natubleng Buguias Benguet. The funeral service was conducted at the church he planted in the early 1980s.
Pastor Wesley Kimao died in his sleep at age 78 while attending a funeral wake. What a good way to die! He did not have to bother anyone with any terminal illness or disease associated with senility. He had been pretty healthy all his life and he had been praying not to experience death but to experience the Rapture. God, however, did not answer his prayer of not experiencing death, but to witness the Second Coming alive.
Rufino Kimao was born on April 8, 1935, the son of a pagan priest but was converted through the ministry of Rev. Bonifacio Urbano. Kimao was one of the earliest converts among the pagan, spirit, and Kabunian-worshiping  tribe in Bakun Benguet.   His birth place lies few miles away from Kabunian Mountain, where the Legend of Doligen transpired. When the first Wesleyan Bible School opened in Cabanatuan, Kimao was the first Igorot boy to study.  He was not academically astute but among his peers he was the most successful church planter and pastor.

Pastor Kimao married Trinidad Bello from Mindanao, Southern Philippines. Though the marriage was prearranged, the couple had a successful marriage. They didn't have a biological child and had to adopt a girl. The couple named their adopted daughter Gloria Grace.The adopted child however was very wayward and did not become a blessing to them and to the church. Grace have 3 sons on her first husband and pastor Kimao took care of the first two. Rev. Wesley Kimao had a total of 12 grandchildren.

Mrs. Trinidad Kimao died in the early 90s, and I spoke in one of the wake services. Following the death of his wife, the Rev. Kimao wanted to get a wife but was not successful in finding one.

Rev. Kimao was an avid student of Bible prophecy particularly Eschatology or the Second Coming of Jesus Christ. Most of his treasured books in his library are about Bible prophecy. I remember buying a few of his books on prophecy 20 years ago.
Rev. Wesley Kimao left no property or house to his daughter and eight grandchildren except his books and perhaps a little pension. It amazes me that uncle Kimao never worried about buying or building a house of his own. His example shows that it is possible for a pastor to give his life in a full-time service and ministry without a home of his own. Yet, while he left nothing in terms of material gain for his family, he left something more than money could ever buy; more than gold could ever purchase. He left the touch of heaven to his family and churches he planted and pastored. His legacy was over 10 churches that he planted in the Igorot world of the Cordilleras and hundreds of active followers of Jesus Christ to this day. Among those over 10 churches, one exist in Baguio City, the summer capital of the Philippines. A friend of mine by the name Olnesio (Ernesto) Saliw-a was converted under Pastor Kimao's ministry in 1988, shared with me about his conversion experience  that sparks my quest for salvation in Jesus Christ. Although, Olnesio didn't become a pastor he planted two churches, one exist in my own home village, Kayapa Bakun. Many of pastor Kimao's converts are also in the ministry today.
What a life! While he had lived his life to the fullest, only eternity reveals his real legacy in the ministry. At the Judgment bar of God, the words of Jesus, "Well done, thou good and faithful servant. Welcome to the joy of the Lord", could be said of the Rev. Wesley D. Kimao.
Posted by The Igorot Preacher at 8:40 PM

Today, those who have been touched and influenced by the life of Rev. Jan Visser, commemorate his 8th year death anniversary. I met bro. Jan in 1991 when pastor Kimao and my brother brought me to Grace Mountain Mission for enrollment. Jan Visser was Dutch military officer and served in Indonesia during his military tenure.

In 1979, he and his Indonesian friend came Sinipsip Bakun, Northern part of the Philippines as missionaries and founded Grace Mountain Academy (GMA), known today as Grace Mountain Mission (GMM). Sinipsip Bakun is located in a mountain ridge at over 7000 feet above sea-level. At GMM, the student called Jan, Brother Jan or Pak Jan. Brother Jan was a great source of encouragement and motivation to many. He had inspired and impacted many lives in the Igorot world. Thankfully, I am one of those individuals that have been greatly impacted by the life of this man. Bishop Jan Visser was never married and he remained celibate the rest of his life. When he died, he was buried at the GMM campus. As a matter of fact, the bishop had his tomb built while still alive.

Although Brother Jan does not have a theological training, he had been a missionary for over 10 years and more than qualified when he was recommended for church ordination in the early 90s. For some reasons, the Skyline Luzon District (SKLD) Conference of The Wesleyan Church didn't perform the rites of ordination. Nevertheless, Bishop Alfonso G. Pablo Sr., then the General Superintendent of the Wesleyan Church of the Philippines later had bestowed Jan Visser the title Reverend with all the rights and privileges of being an ordained minister. Doctor Pablo's letter of ordination was read during a chapel service at GMM to which I was present.

In the mid part of the 90s, Bishops and leaders of the Filipino Communion of Evangelical Episcopal Churches (FCEEC) officially ordained the Rev. Jan Visser and was also elevated in the ranks of Archbishop.

During my stay at Grace Mountain Mission, Bro. Jan challenged and motivated us incessantly not only spiritually but academically. “You will never see the world unless you earn how to speak English,” his voice would thunder throughout the chapel room during our morning or evening services. Many of the students seemed convinced, but others were skeptic. At other times, he would say, “The language of the world is English. Learn and speak it properly.”  Then one day, he told us that he started to learn English when he was twenty-seven years old. Back then, I didn't know he had to learn the English language as well. You see, most of us in the mountain thought that all white-skinned people are Americans, and therefore they speak English as first language.  Brother Jan also spoke about language immersion if we are to speak English with fluency. After, setting my foot at the seminary years later, and then to Cambodia, I realized that brother Jan was right about his stance on the English language. 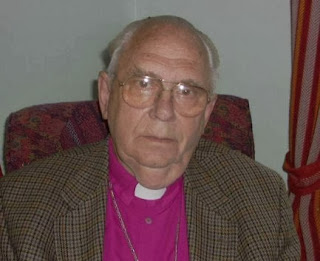 On September 15, 2005 Archbishop Jan Visser died while being attended at Saint Luis Hospital in Baguio. He was laid to rest in a tomb at the GMM campus on September 21, which happens to be my 34th birthday. Brother Jan's love for the Igorot Children is exemplified in his determination to see the children succeed in life. I was not able to attend the funeral as I had just returned to Cambodia in July that year. My family and I had fun visiting him in the earlier month of 2005.

The school he founded in 1979 still exist today. Rev. Jose Milan continue to lead and supervise the school.

Here is a link about Archbishop Jan Visser

Posted by The Igorot Preacher at 12:10 PM