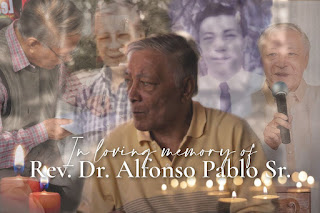 Alfonso “Alfon” Granadozo Pablo, Sr., 82, went home to be with his Creator, Savior, and Master on November 24, 2021, at the Philippine Heart Center in Quezon City.

Alfonso was born September 29, 1939, in Camiling, Tarlac, Philippines to Bartolome Pablo and Antonia Granadozo. Alfon is focused and determined. At a young age he was familiar with farming and helped in their rice fields. He learned early the value of planting seeds and hard work. One of his favorite childhood memories he frequently talked about was caring for carabaos (water buffalos) and having them fight while he and his friends rode on them, unaware of the dangers.

His ungodly, self-centered youth days were spent in the beautiful and bustling town of Marbel in Koronadal, South Cotabato. A natural athlete, he played for gamble and competed in volleyball and high jump. God intervened and called him to a life transformed by His grace and to dedicated service in the ministry. For this purpose, he finished his Bachelor of Theology at Wesleyan Bible College in Kabacan, Cotabato, Master of Divinity at Asian Theological Seminary in Quezon City, Doctor of Ministry at Philippine Baptist Theological Seminary in Baguio City, and Doctor of Philosophy at Alliance Graduate School in Makati, Manila.

His retirement years were spent on being a resource speaker and adjunct seminary professor, helping organize a group of retired ministers called Capacity Assistance League for Elders’ Best (CALEB) with the mission of encouragement and mentorship, spending time with his children and grandchildren, tending his garden in New Tanza, and writing his four signature books: Transforming Leaders, Transforming Households, Transforming Believers, and the last one Transforming Faith which is still in his own handwriting form.  This one he fervently crafted daily for long hours and sacrificed sleep to get it done and hopefully published before God calls him Home. God decided it was time for him to rest, so with the family’s pledge to get it done, he went into a deep sleep and his spirit returned to his Maker.

Posted by The Igorot Preacher at 5:52 AM 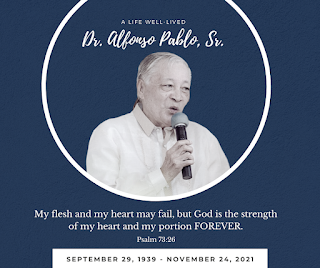 Another hero of the Christian faith has gone home at age 82. He was regarded as a man of holy character, a visionary leader, a mentor, a preacher, a theologian and a servant.

The first time I heard him preach and teach in the mid-90s, I thought if there is a man of integrity I like to emulate; it would be this man.  When I got married, I asked him if he’ll do the ceremony and become of my ninongs. He, the General Superintendent of the Wesleyan Church of the Philippines was kind enough to travel by bus from Manila to Sinipsip, Bakun Benguet. That was about 12 hours of travel.

Being the bishop of the Wesleyan church of the Philippines, I sat in many of his lectures and listened to many of his fiery messages. I consider him to be one of the best Filipino preachers I've ever heard. You cannot sit in his lectures without being inspired and motivated. You cannot listen to his passionate preaching without being convicted and challenged. Yet, if there was a man who epitomized a holy character it was Dr. Alfonso Pablo. His integrity was unquestionable. His visionary leadership was undeniable. His thirst for knowledge was unextinguishable and his passion for God was unmistakable! He has inspired and mentored many. I am one of the numerous lives he has touched and this cannot be over emphasized. He had left an indelible imprint in my heart; the man he was. While many leaders were falling by the wayside, he remained a clarion of the holiness preaching.

In his message posted on Facebook, Dr. Jun Vencer, the former General Secretary of the Philippine Evangelical Church (PCEC) writes,

"Dr. Alfonso Pablo, Vice-Chairman of Global Transformation Ministries Philippines, author, theologian, and leader. He was a devoted husband and a godly father. Personally, he was a dear friend and faithful co-worker. He was a thinker and deeply rooted in the evangelical faith.  He had a transformational vision for society and a passion for souls. His commitment to the local church and church planting was central to his mission. Hours of discussion on various issues had helped shape my own worldview for which I am indebted. We will miss him but his legacy will continue to influence many evangelical leaders into the future."

Dr. Pablo will be missed greatly. But because he had lived his life to the fullest, even though he was not present from the body, he is present through his legacy.

Dr Pablo earned two doctorates; Doctor of Ministry in Practical Theology (1982) and Doctor of Philosophy in Applied Theology (2019). He has published 3 books since 2010. Transforming Leadership (2010), Transforming Households (2014) and Transforming Believers (2020). He was working of his fourth book, Transforming Faith. Hopefully this will be published soon.  If there’s a fifth book I would want him to write, it would be Transforming Preachers. That is no longer an option but perhaps one of his protégés can make that possible!

Earning his doctorate in Philosophy at the age of 80, two years shy away from his death just prove his insatiable thirst for knowledge. I am 50 and I have not earned any yet.

By the way, Alfonso G. Pablo Sr. was the first entry I made on Wikipedia in November 2011. The article has been edited since.

I guess my only regret is that I penned these words after he is gone and he won’t be able to read them.