Forgiveness: A Christian Response to a Burned Down Parsonage in Cambodia 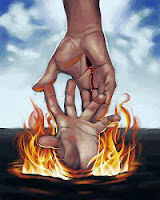 Villagers in Boeng Krum gathered at the construction site to protest the soon-to-be-built pastor’s house.  Their efforts succeeded.  The project halted and the new pastor was left with no place to live.  Arun had no other option but to build a makeshift grass shelter.  Its unique triangular grass roof extended to the ground, serving a double purpose as both roof and wall.  No villagers protested.  They seemed happy to see the pastor living in such basic conditions.

Arun didn’t let the situation bother him until the night snakes crawled over the floor.  Within a year’s time, the deteriorating roof was leaking profusely.  Scorpions and centipedes crawled on the wooden floor five inches above the ground during rainy season.  Obviously, something needed to be done immediately.

“It’s time to build the parsonage,” Arun told his people.  “Last year’s strong opposition has mellowed.”  Everyone agreed.  Construction began on the first week of April 2006 without incident.  Posts went up; shiny roof sheets were installed; a concrete wall followed.  But the new house drew the attention of some prominent Buddhist leaders.
When the house was nearly finished, a mob led by the village chief and a Buddhist leader razed and burned it to the ground.  Witnesses watched in horror as approximately 20 people participated in the devastation, some chanting anti-Christian slogans such as “Long live Buddhism!” and “Down with Christianity!”  Bystanders were in tears while the flames gradually consumed the building.  Could those be tears of joy?  No.  Tears of sorrow and pity mingled together for this thing which never should have happened.  Many Buddhists were among those unhappy with the actions of the mob.
As the fire died down and the smoke vanished, my team arrived at the scene.  Seven fully armed police officers stood by, waiting for our “go” signal to arrest the assailants.  Ashes and ruins remained on the ground.  I asked God for wisdom.  What should be our response as representatives of Jesus in this land?

Due to the rareness of religious persecution in Cambodia, some people dismissed the notion that religion was the motivation for this terrible deed.  In newspaper reports that followed, journalists tried to pinpoint other reasons for the misdirected zeal.  I didn’t know if we could ever be sure about the motivations of the perpetrators, but deep within my heart I knew one thing was certain.  Our only response must be to forgive.

Before I could say anything, members and pastors made their feelings clear.  “We should teach these Buddhist leaders some lessons,” they said.  They agreed that the only response was to retaliate through legal means.  They unanimously voiced their intent to take the matter to court.  They argued that no Cambodian law prohibits its constituency from building houses on their own property.  “Christians are always at the bottom of the ladder,” they agreed, “always being crushed by others.”

“What’s wrong with being at the bottom or being seen as weak and powerless?” I countered.  As the discussion continued, I was aware that a decision had to be made within 48 hours or the ring leaders could not be arrested.  Delaying a decision meant allowing the mob leaders to go unpunished.

My church friends did not want to see that happen.  “We will be forever persecuted if we don’t act today,” they argued.  “Go to court or close down the work,” they advised.

As I paused to reflect, some questions came to mind.  Am I ready to pay the price for further persecution? I wondered.  Am I willing to take the responsibility for more injustice toward Christianity in this community?  But I knew that speculation based on fear of future persecution was not solid ground for making any present decision.  After all, Christians are called to suffer with Christ.

United by strong conviction, Kimsan, the Cambodian Wesleyan leader, and I stood our ground opposing the majority opinion among pastors and members that the incident should take its course to court, see the mob leaders arrested, and building costs paid back in triple fold.  Though it seemed culturally acceptable to bring the matter to court, we knew we must put Scriptural principles above cultural consensus.

The emotional atmosphere turned gloomy when we declared that we would not be filing a complaint or going to court.  Local believers felt that decision would seal further persecution and injustice toward Christianity in their community.  They felt betrayed.  In their eyes, we were simply accepting defeat without fighting for their rights.

We tried to explain our position.  “We may win the case at court, but forever lose our Christian witness.  Winning at the cost of forgiveness does not make one a winner,” we told them.

It’s not easy.  Natural tendencies to pursue revenge can overwhelm us in times of tragedy and loss.  But that road leads to bitterness, anger, and hatred.  The only remedy left to unloose such a stranglehold is forgiveness.  When we forgive offenders, we release ourselves from the grip of the past and resolve to gaze at the future with faith and hope.  After all, forgiveness is an act of faith.  That is what we all needed to discover.

And we did.  Feelings of defeat and the unwillingness to forgive gradually subsided.  A remarkable transformation took place.  Pastor Arun, together with some key church members, agreed to meet the mob ringleaders to offer forgiveness and seek reconciliation.  Their offer was accepted.

What happened next was totally unexpected.  Some Buddhist leaders, the district governor, and commune chief gave their permission to build a new house similar to the previous one, a gesture of genuine reconciliation.
Each Sunday, the place of worship is filled with eager worshipers.  No vacant seats available.  To date, no further acts of persecution and no injustices toward Christianity have occurred in Boeng Krum.

No fire is strong enough to destroy the power of forgiveness.

Note: I, Greg, wrote this article for the Wesleyan World Magazine in 2006. The article was originally titled "Fire and Forgiveness." This story happened on April 28, 2006. Today, the Wesleyan Church still exists in that village. In 2010, the village chief and Buddhist leaders granted the church a permit to build a parsonage in the church property.
Posted by The Igorot Preacher at 4:51 AM