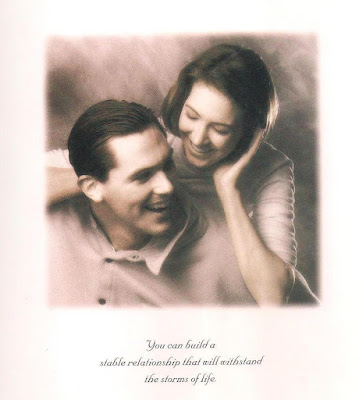 Sometime in 2010, when I was new on Facebook, I received a message from a young woman from the Philippines asking me if I would write a short message on Repairing our Broken Vows for the couples in her church. You see, she and a group of other young people organized a couples-night for church members at JCF Buyagan. Soon I heard the result—it had been a triumphant success; the young people were happy they were able to help in rekindling the fire in couples’ relationship. Excited to be a part of the couples-night, giving a message from a distant shore, I began to write my message. (This blog post is a revised and expanded version of message I sent to her).

As I write this note, I think about the family of a young pastor I visited sometime ago who had been going through turbulent times of marital problems. In his 7th year of marriage, his marital vow‘...for better or for worse...’  is like a cord that is now broken and needs some repairing; his marriage vow—till death do us part—is like a painting that is fading under the scorching noon-day sun of trials, and yes, it needs renewing.  He left his home and church for months; with only infrequent visit to see his daughter and son, ages four and two. I set an appointment with him in a restaurant to talk about his problem. At the course of our conversation, there was no indication he would want to go back to his family; he was pondering seriously the route of divorce. I tried to listen attentively as I eat my noodles or sip my iced-coffee with milk occasionally. “There is no way this marriage can be repaired,” he said. “If you want to make this marriage work,” I replied, “you’ve got to make a deliberate choice and commitment.” I refrained from giving too much advice, except pleading him to return to his family and start a new commitment to love his wife. After we prayed, we parted ways. Saddened by the pastor’s situation, I took a moto-taxi and drove home wondering why such a thing would ever happen to a nice person—it could have been prevented—I thought, could it be?

After that meeting, my hope was high, however; surely, he would, one day, return to his family. He was once a good student; in a million years, I would not have thought of him leaving his family. In my preaching class years ago, he won the best preacher award voted by students.  Not long after that meeting, even after asking some church elders to intervene, I found out that he still had not returned home. I gave him a call a few months later and was told that he has decided to leave his wife and children. Another home was just destroyed—a mom now added in the list of a single mom, worrying how she would raise her kids; kids abandoned by a dad with a yearning question, when would dad ever come home?

This is not an isolated case. It already happened so many times over, leaving many broken lives behind. Those who went through such experience, especially the children, suffer miserably. The pain, hurt, and damage done are beyond repair. By the power of forgiveness, some managed to skip the haunting memory of their past; others refused to forgive while the invisible wall of ungrace grew ticker. Although, others put their garbage behind, recovered and moved on, many carried their baggage of broken home until their dying day.

“If a pastor struggles to keep his marriage strong, how much more can a common member stand the test?”  somebody asked. When it comes to keeping marital relationship alive, some think that pastors have more power than the members do have. The fact is pastors are not immune to marital problems. Although pastors may have higher accountability because of their title as minister, they do not necessarily possessed special power to make their marriage work.

The bottom line is, whether or not you are a pastor, you are to keep your marriage covenant. None of us is immune to temptation; none of us is perfect in our marital relationship. Everyone struggles, prone to failure and temptation. Perhaps you have stumbled and fallen by the way side. Perhaps you have been tempted to be unfaithful to your spouse. Perhaps you are going through hard times as you read this. Marriage is a hard work that last for a lifetime. The good news is even if you have fallen by the way side you can get up, start all over again, and move on! Today you can be the very best husband your wife had ever dreamed. Today you can be the best wife your husband had ever dreamed. There is always hope. Give it a chance.


Husband and wife, you must work hard to keep your vows alive. In the end, you’d be glad you did!
Posted by The Igorot Preacher at 8:05 AM