BIBLICAL PATTERN FOR REVIVAL (Part I) 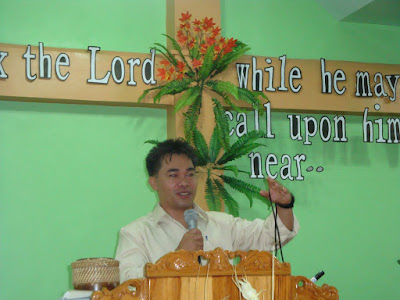 You gave me one of the most challenging themes I have ever encountered, REVIVE ME IN YOUR WAY. The reason I say that is because there are so many human ways and patterns people are trying in order to reach God. They are trying to get revive in their own ways.

Genuine revival is not an event; and definitely, not a program. This is the reason genuine revival in the past century that shook America and Great Britain  were  not scheduled. I have not seen with my naked eyes those revival that swept Great Britain and the US in the past. While, I would love to see it myself, I don’t want to go back. We are living in a different world, different time and generation. God is the God of the past as well as the present; we serve the same God. God can do different things to us in order that He will revive us in HIS WAY!

If we look at the Scripture, there are several patterns of revival occurring in the life of God's people. For our BIBLICAL PATTERN FOR REVIVAL, we will cover the life of a king,  few years before the fall of Jerusalem in 586 BC. Please turn your Bible with me to the book of 2 chronicles chapter 33:1-34:1-8.

Amon was crowned King of Judah when he was 22 years old. Following his crowning as king, Amon did evil in the sight of God. Idolatry is everywhere. People had forgotten God. There was idol worship everywhere and the people sacrificed to Idol. Amon was unfortunate king for he reigned only two years, he was killed in his own house.

Let us look at Josiah's life according to age.

JOSIAH AT EIGHT
Josiah was eight years old when he became king, and he reigned in Jerusalem thirty-one years. 2 He did what was right in the eyes of the LORD and walked in the ways of his father David, not turning aside to the right or to the left. 3 In the eighth year of his reign, while he was still young, he began to seek the God of his father David. (I Chronicles 34:1-3a)

Two Things happen when Josiah was 8 years old:
At the age of 8, his father was killed in his own house. Perhaps in his own palace. We can imagine, that Josiah perhaps witnessed the murder of his father. Perhaps he heard the scream. Perhaps he saw the blood flowing. He was 8 years old. Is there anyone of you here, saw the murder of your father at 8 years old? Perhaps none. I don’t know what you had been in the past. I don’t know what experiences you had been. Like Josiah, perhaps there is pain deep down inside of you.
·         At the age of 8, he began to reign as king. His father might have been 24 years old when he was murdered. We can imagine that Josiah was traumatized with his experience. We can imagine the fear, perhaps anger, and bitterness in Josiah’s heart as began to role. As a child, at 8 years old, I don’t know what experience you had been through. I know of several girls who had been sexually molested at early age. The pain, the hurt, and bitterness is so difficult.

At age 8, Josiah’s father was killed. But at the age of 8, he became a king. Is there anyone here who got save at the age of 8? Most of the time, our experience are positive and negative, good and bad, success and failure. If you have evil and dirty past God can turn it into something good and beautiful if you’ll let him.

JOSIAH AT SIXTEEN
How many here are 16 years old? 16-year-olds are usually fourth year high school and first year college students. So most of you are older than 16. Do you know that approximately one million teenagers commit suicide every year! In every 1,000 teenagers, 84 of them are pregnant. Sexual abuse and rape are high among teenagers. Statistics are staggering. Here are some positive sides to it. Among the age groups, more younger ones are turn to the Lord than older ones.

Look at what happened to Josiah at age 16. When he was 16 years old, Josiah began to seek God. Don’t tell me a 16 year old girl or boy living a life committed to Jesus is a fool. Others might tell you, oh, you have to experience this and that, don’t waste your life. Enjoy your youthful days, you have experience all the good things the has to offer and then serve God when you are old. That is a lie straight from hell. I am going to tell you dear young people, don’t waste your life on something that is worthless.
Turn your eyes, from worthless things. What are those things that are worthless?

First, seeking God requires Faith in who God really is. You will not even begin to seek God without faith.

Second, seeking God implies deep humility. You won’t seek God without it. Do you know why people will not seek God, its because they are too proud to seek him.They are too intelligent to seek God.

Third, seeking God means TURNING AWAY FROM SIN THROUGH REPENTANCE. There never was and never will be a genuine revival without brokenness of heart and spirit. Genuine spiritual move of God begin in spiritual brokenness. Deep conviction of sin. Psalms 119:37 says, keep my eyes from vanities…Turning away from a life of sin is difficult when you are enjoying the pleasure of sin.

Fourth, seeking God means TURNING TO GOD THROUGH PRAYER. That is why revival God’s way is REVIVAL OF A PRAYER LIFE. If you didn’t realize, the phrase “revive me in your way” is prayer in itself. Only God can revive you in His ways in response to your prayer of brokenness and repentance.

Finally, seeking  God mean, TURNING TO GOD THROUGH HIS WORD. Revival God’s way is a REVIVAL OF OUR HUNGER AND THIRST FOR GOD’S WORD. In a scale of 1-10, where do you rate your hunger for God’s Word?


Biblical Pattern for Revival (Part II)
Posted by The Igorot Preacher at 4:01 PM