Everyone Deserves a Second Chance

Everyone needs and deserves a second chance; perhaps not just a second chance but many chances.  “Please give me a second chance,” is the voice I hear from John Mark pleading when Paul insisted not to take him along with them on their second missionary Journey (Acts 15: 37-38).
Mark failed to persevere and he deserted Paul and Barnabas during their first missionary journey. The reason he quit is not known, but perhaps he was discouraged or missed home and family. Or maybe the journey was too difficult and giving up seems the easiest route. Mark learned his lesson that on Paul and Barnabas Second Missionary Journey, John Mark wanted to join them. Paul being an idea-oriented person at least at this point, sees John Mark as a failure and not profitable to bring along. But Barnabas being the son of encouragement and more people-oriented did not agree with Paul’s conclusion. “Let’s give him a second chance” seems the echo I could hear from Barnabas in this particular event. The two missionaries couldn't agree that they ended up splitting. Take note that these two different perspectives divided the two missionaries. Luke recorded in Acts the journey of Paul, but he didn’t record Barnabas’ journey.

Most of us had quitting points. No one is immune to discouragement. Like Mark, all of us failed at some point in our lives (not necessarily sin). Perhaps you can recall the time when you failed to carry on! All of us have known failures in our daily walk with God. Probably you remember the time you have failed in your Christian life. All of us needed a second chance, or else we won’t be here today. When others failed, let’s give them a chance to prove themselves. What they need is encouragement. When others have fallen or failed, that is not the time to give a sermon, that is the time to embrace and accept them. Years ago, I surrendered a friend to his boss after embezzling almost a thousand dollars from a credit union where he previously worked in order to maintain his unlawful relationship with another woman. The executive manager scolded him very strongly. I thought, "Man, it’s useless because the guy has already fallen. The man has already stolen the collection, and no amount of scolding will bring the money back." The rebuke, correction, scolding from the manager are so sharp that I couldn't but felt sorry for my friend.
What the manager did is a perfect example of what we usually do when someone did something wrong. We give sermon. We scold them. At times, instead of lifting those who have fallen, we kick them and trampled them!
DO YOU FLY LIKE AN EAGLE AND A GOOSE? 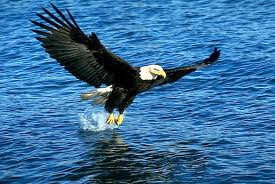 Goose and eagle fly differently. Eagle flies alone. Eagle can fly through the stormy sky. There are many times we fly alone like an eagle. We spread our wings like an eagle and soar to the top! We fly through the stormy weather and strong wind. Perhaps, it is needed to fly alone at times to prove our maturity and to show we can stand alone! But wouldn't it be better if we learn to fly like geese do. From what I’ve read, a goose does not fly alone, it flies with other geese. When geese fly during a long journey, they support each other. As the geese fly, they get tired, due to the strong wind, rain, and the heat of the sun that beat them continually. But no one would fall because they support each other. How do geese support each other? The weaker ones or the weary ones, fly behind the wings of the strong ones. The stronger geese fly ahead to support the weaker ones behind them. And as long as they are in tacked, no one would fall to the ground. If a goose flies alone, it guarantees a fall.

Christian life may be compared as a flying adventure. Some Christians fly like a goose, because to fly on the air does not only require strength but requires others’ support. In the course of flying, one will evidently experience weariness. Some gave up the flying expedition of the Christian life due to weariness, added by the strong wind, sun, and rain that beat them continually. They give up because no one supported them. Yet, some endures despite the difficulties because they fly together and support each other—the weaker one flies behind the wings of the strong ones. Strong ones should support the weaker ones.

No one can fly so long and not be discouraged. In the Christian life, we cannot fly alone in the long journey and stormy skies without the support of other believers. Even if we fly like geese, we still get discouraged, get tired and failed. We need each other in terms of prayers, encouragement, moral and even financial support if necessary. No one can fly alone and not become weary. Therefore, we need each others' wings and strength to keep us flying till the journey is over.

How would we make someone fly easier this week? What effort can you and I make today to help someone fly or to keep them flying. May be words of encouragement; may be prayers, but may be financial or material support.

Like Barnabas, we need to encourage others when they fail. We should not leave them behind. Although, Paul was able to reconciled with Mark sometime later and he called Mark 'profitable for my ministry', what would have happened if Barnabas didn't fight for Mark earlier? What would have happened to Mark if Barnabas gave up on him? Mark, by the way, wrote the second book of the New Testament, the Gospel according to Mark. I would like to believe that Mark have told Barnabas, 'Thank you for not giving up on me'!  We need someone who is not willing to give up on us!

How many John Marks are out there needing second chance?  Will you be a Barnabas to them?

Posted by The Igorot Preacher at 9:53 PM